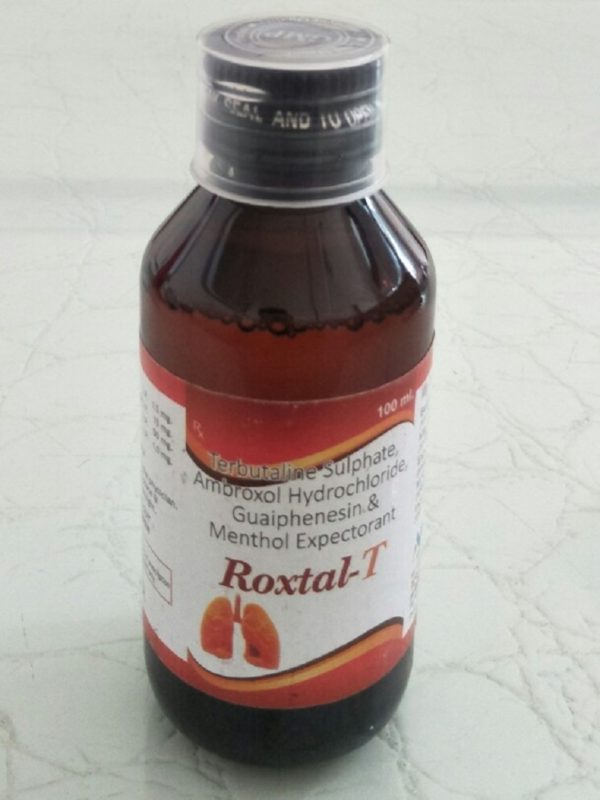 This combination of Terbutaline Sulphate, Ambroxol Hydrochloride and Guaiphenesin is an expectorant. Terbutaline is a selective beta2 -adrenergic agonist which predominantly stimulates beta2-receptors, thus producing relaxation of bronchial smooth muscle. Ambroxol possesses mucokinetic (improvement in mucus transport) and secretolytic (liquifies secretions) properties. It promotes the removal of tenacious secretions in the respiratory tract and reduces mucus stasis (arresting the secretion of mucus). Besides that, Ambroxol also exhibits anti-oxidant activity. Guaiphenesin, by increasing respiratory tract fluid, reduces the viscosity of tenacious secretions and acts as an expectorant. Another possible mechanism by which it acts is by increasing the water bonding in the sputum, thereby decreasing its viscosity and leading to an increase in mucokinesis. Guaiphenesin is effective in both productive and nonproductive coughs. Menthol has a cooling effect on the throat. It has been suggested that the benefits of menthol may be due to an effect on calcium channels of sensory nerves.

Terbutaline:
Terbutaline is a selective beta2 - adrenergic causing bronchodilation; increase in mucociliary clearance; suppression of oedema and anti-allergic effects. The pharmacologic effects of beta-adrenergic agonist drugs, including terbutaline, are at least in part, attributable to stimulation through beta-adrenergic receptors on intracellular adenyl cyclase, the enzyme that catalyses the conversion of adenosine triphosphate (ATP) to cyclic-3′,5′-adenosine monophosphate (cyclic AMP). Increased cyclic AMP levels are associated with relaxation of bronchial smooth muscle and inhibition of release of mediators of immediate hypersensitivity from cells, especially from mast cells.

Ambroxol:
Ambroxol (group of benzilamides) belongs to secretolitical and secretomotoric medicinal products. It possesses expressed expectorant effect. Mechanism of action of the medicinal product is stipulated by stimulation of serous cells of tonsils of bronchial tubes' mucous membrane, increasing of mucous secretion content and changing of correlation of serous and mucous components of phlegm, breached under pathological processes in lungs. Under this hydrolyzing ferments activate and releasing of lizosoms from Clark's cells strengthens, that causes decreasing of viscosity of phlegm. Ambroxol increases content of surfactant in lungs, which is dealt with strengthening of synthesis of the last and secretion in alveolar pneumocytes, and also with breach of its disintegration. The medicinal product increases mucociliar transport of phlegm. It suppresses coughing insignificantly. Ambroxol well penetrates through the placenta barrier, improving synthesis of surfactants during uterine life of foetus, and also it has an ability to warn syndrome of insufficient breathing in newborn. The medicinal product does not cause immense creating of secretion, reduces spastic hyperactivity of bronchial tubes- one of the main factors of developing of bronchial asthma under allergy. Ambroxol is more effective, than its predecessor - Bromhexine; it is non-toxic one and well endured by patients. Action of retard form of Ambroxol is kept in 9-10 hours after administration inside.

Guaiphenesin:
Guaiphenesin is thought to exert its pharmacological action by stimulating receptors in the gastric mucosa. This increases the output from secretory glands of the gastrointestinal system and reflexly increases the flow of fluids from glands lining the respiratory tract. The result is an increase in volume and decrease in viscosity of bronchial secretions. Other actions may include stimulating vagal nerve endings in bronchial secretory glands and stimulating certain centres in the brain, which in turn enhance respiratory fluid flow. Guaiphenesin produces its expectorant action within 24 hours.

Menthol:
Menthol has a cooling effect on the throat. It has been suggested that the benefits of menthol may be due to an effect on calcium channels of sensory nerves.

Terbutaline:
Basic parameters have been evaluated in man after oral administration of therapeutic doses, e.g.
Renal clearance (CLR): 1.925/ml/min (males)
Renal clearance (CLR): 2.32ml/min (females)
Terminal half-life: T½ has been determined after single and multiple dosing (mean values varied between 16-20 h)
Bioavailability: Food reduces bioavailability following oral dosing (10% on average).
Fasting values of 14-15% have been obtained.
Metabolism: The main metabolite after oral dosing is the sulphate conjugate and also some glucoronide conjugate can be found in the urine.

Guaiphenesin :
Absorption: Guaiphenesin is well absorbed from the gastro-intestinal tract following oral administration, although limited information regarding its pharmacokinetics is available.
Distribution: No information is available on the distribution of Guaiphenesin in humans.
Metabolism and Elimination: Guaiphenesin appears to undergo both oxidation and demethylation. Pharmacokinetics in Renal/Hepatic Impairment: There have been no specific studies of Guaiphenesin in subjects with renal or hepatic impairment. Caution is therefore recommended when administering this product to subjects with severe renal or hepatic impairment.

Side Effects:
The most common adverse reactions to terbutaline are tremor, headache, tachycardia, palpitations, muscle spasms and hypokalaemia. Side effects resulting from guaifenesin and ambroxol administration are very rare.

Terbutaline:
Due to the positive inotropic effect of beta2-agonists, these drugs should not be used in patients with hypertrophic cardiomyopathy.
Tocolysis: Terbutaline should be used with caution in tocolysis and supervision of cardiorespiratory function, including ECG monitoring, should be considered. Treatment should be discontinued if signs of myocardial ischaemia (such as chest pain or ECG changes) develop. Terbutaline should not be used as a tocolytic agent in patients with significant risk factors for pre-existing heart disease. During infusion treatment in pregnant women with beta2-stimulants in combination with corticosteroids a rare complication with a pathological picture resembling pulmonary oedema, has been reported.
Respiratory indications: Patients with underlying severe heart disease (e.g. ischaemic heart disease, arrhythmia or severe heart failure) who are receiving Terbutaline should be warned to seek medical advice if they experience chest pain or other symptoms of worsening heart disease. Attention should be paid to assessment of symptoms such as dyspnoea and chest pain, as they may be of either respiratory or cardiac origin.
Due to the hyperglycaemic effects of beta2-agonists, additional blood glucose controls are recommended initially in diabetic patients.
Potentially serious hypokalaemia may result from beta2-agonist therapy. Particular caution is recommended in acute severe asthma as the associated risk may be augmented by hypoxia. The hypokalaemic effect may be potentiated by concomitant treatments. It is recommended that serum potassium levels are monitored in such situations.

Ambroxol:
Care to be taken to avoid contact with eye, skin, serious ingestion or inhalation.

Guaiphenesin:
Guaiphenesin should be not used for persistent or chronic cough, such as occurs with asthma, or where cough is accompanied by excessive secretions, unless directed by a physician. Caution should be exercised in the presence of severe renal or severe hepatic impairment. The concomitant use of cough suppressants is not recommended. Patients with rare hereditary problems of fructose intolerance should not take this medicine. Not more than 4 doses should be given in any 24 hours. Avoid with any other cough and cold medicine. Consult a pharmacist or other healthcare professional before use in children under 6 years.

Be the first to review “ROXTAL-T” Cancel reply