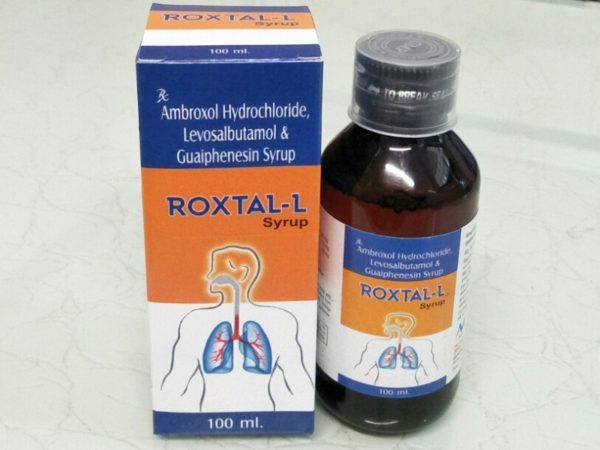 Ambroxol:
Ambroxol (group of benzilamides) belongs to secretolitical and secretomotoric medicinal products. It possesses expressed expectorant effect. Mechanism of action of the medicinal product is stipulated by stimulation of serous cells of tonsils of bronchial tubes' mucous membrane, increasing of mucous secretion content and changing of correlation of serous and mucous components of phlegm, breached under pathological processes in lungs. Under this hydrolyzing ferments activate and releasing of lizosoms from Clark's cells strengthens, that causes decreasing of viscosity of phlegm. Ambroxol increases content of surfactant in lungs, which is dealt with strengthening of synthesis of the last and secretion in alveolar pneumocytes, and also with breach of its disintegration. The medicinal product increases mucociliar transport of phlegm. It suppresses coughing insignificantly. Ambroxol well penetrates through the placenta barrier, improving synthesis of surfactants during uterine life of foetus, and also it has an ability to warn syndrome of insufficient breathing in newborn. The medicinal product does not cause immense creating of secretion, reduces spastic hyperactivity of bronchial tubes- one of the main factors of developing of bronchial asthma under allergy. Ambroxol is more effective, than its predecessor - Bromhexine; it is non-toxic one and well endured by patients. Action of retard form of Ambroxol is kept in 9-10 hours after administration inside.

Guaiphenesin:
Guaiphenesin is thought to exert its pharmacological action by stimulating receptors in the gastric mucosa. This increases the output from secretory glands of the gastrointestinal system and reflexly increases the flow of fluids from glands lining the respiratory tract. The result is an increase in volume and decrease in viscosity of bronchial secretions. Other actions may include stimulating vagal nerve endings in bronchial secretory glands and stimulating certain centres in the brain, which in turn enhance respiratory fluid flow. Guaiphenesin produces its expectorant action within 24 hours.

Levosalbutamol, also known as levalbuterol, is a short-acting β2 adrenergic receptor agonist used in the treatment of asthma and chronic obstructive pulmonary disease

Be the first to review “ROXTAL-L” Cancel reply