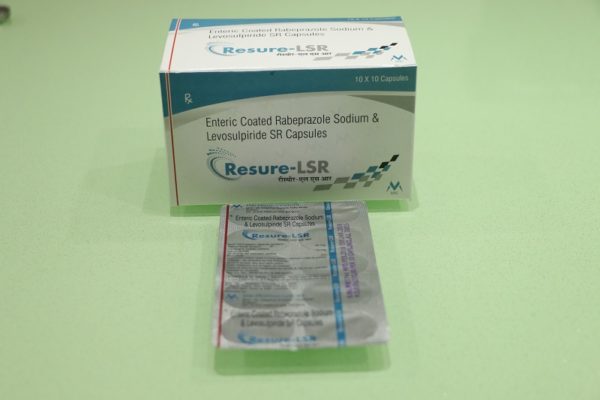 Be the first to review “RESURE-LSR” Cancel reply

Rabeprazole belongs to a class of anti secretory compounds (substituted benzimidazole proton-pump inhibitors) that do not exhibit anticholinergic or histamine H2-receptor antagonist properties, but suppress gastric acid secretion by inhibiting the gastric H /K ATPase (hydrogen-potassium adenosine triphosphatase) at the secretory surface of the gastric parietal cell. Because this enzyme is regarded as the acid (proton) pump within the parietal cell, rabeprazole has been characterized as a gastric proton-pump inhibitor. Rabeprazole blocks the final step of gastric acid secretion. In gastric parietal cells, rabeprazole is protonated, accumulates, and is transformed to an active sulfenamide. When studied in vitro, rabeprazole is chemically activated at pH 1.2 with a half-life of 78 seconds.
Levosulpiride is more selective and acts primarily as a dopamine D2 antagonist.
The prokinetic effect of Levosulpiride is mediated through the blockade of enteric (neuronal and muscular) inhibitory dopamine D2 receptors. Results also show that levosulpiride also acts as a moderate agonist at the 5-HT receptor. The serotonergic (5-HT4) component of Levosulpiride may enhance its therapeutic efficacy in gastrointestinal disorders. This property, together with antagonism at D2 receptors, may contribute to its gastrointestinal prokinetic effect.

The effects on gastric motility can be antagonized by anticholinergic drugs, narcotics and opioid analgesics, that is, if administered together, Levosulpiride’s gastroprokinetic efficacy can be decreased.
Association with psycho pharmaceutical drugs require special precautions and monitoring to avoid undesired and unexpected effects because of interactions. High doses can produce hyperprolactinemia, therefore special control during treatment is advised.
Rabeprazole produces a profound increase in gastric pH and may affect drugs whose absorption is pH dependant, such as ketoconazole and digoxin. Concomitant administration decreases ketoconazole levels by 33% and increases digoxin trough levels by up to 22%.

Rabeprazole prevents the production of acid in the stomach. It reduces symptoms and prevents injury to the esophagus or stomach in patients with gastroesophageal reflux disease (GERD) or ulcers. Rabeprazole is also useful in conditions that produce too much stomach acid such as Zollinger-Ellison syndrome.
Levosulpiride acts as prokinetic agent.

Rabeprazole:
Absorption: Absolute bioavailability is approximately 52%.
Route of Elimination:Following a single 20 mg oral dose of 14C-labeled rabeprazole, Approximately 90% of the drug was eliminated in the urine, primarily as thioether carboxylic acid; itslucuronide, and mercapturic acid metabolites.

Hypersensitivity to any ingredient in the formulation. The drug should be used with caution in Elderly people,Children less than 14 years of age, Parkinson disease, Severe renal or hepatic insufficiency.
The drug should be used cautiously in pregnancy (only when it is expected to benefit the mother more than the possibility of risking the fetus).
The drug is known to be secreted in breast milk, so, its use should be restricted in breastfeeding women.

Levosulpiride must not be used when stimulation of GI motility can be hazardous, for example, in presence of GI hemorrhages, mechanical obstructions or perforations.
It is recommended to be cautious when administering Levosulpiride altogether with alcohol intake, since it can produce an increase in the sedative effects of alcohol.
Levosulpiride can cause somnolence or sedation and dyskinesia in some patients; if some of these symptoms appear, avoid driving a vehicle or machinery.
Special caution is recommended in case of administering Levosulpiride together with psychopharmaceutical drugs, since an increase of undesired effects may occur.