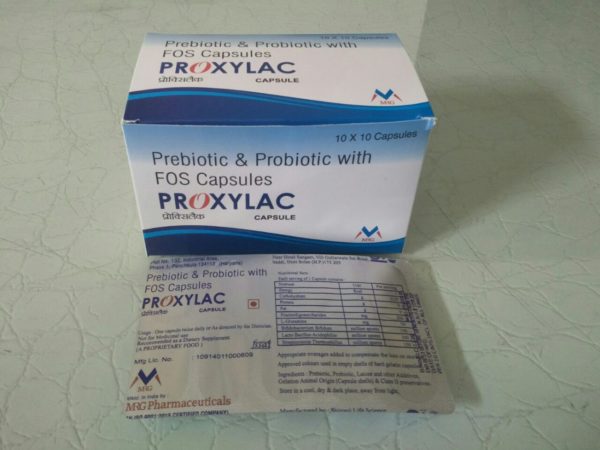 Be the first to review “PROXYLAC CAPSULES” Cancel reply

Prebiotics Capsules are nondigestible food components that stimulate the growth and/or activity of beneficial bacteria ("probiotics") in the colon. In other words, prebiotics are the "food" for probiotics. Probiotics are beneficial bacteria which, when consumed in adequate amounts, provide a health benefit as the result of their presence in the gastrointestinal (GI) tract. Consumption of probiotics is thought to increase the number of helpful bacteria in the GI tract, while at the same time reducing (inhibiting the growth of) harmful bacteria.

Lactobacillusbulgaricus:
Lactobacillus Bulgaricus is one of the symbiotic micro-organisms that can shrink or multiply within the environment of the mucous lining in the gastro-intestinal tract. L Bulgaricus appears to play several important roles as a soldier in this battlefield of the digestive tract. These mechanisms include reducing intestinal infections by excreting metabolic end products-- such as acids --that change the pH of the GI tract. At lower pH ranges, or higher acidic levels, it appears that many pathogens simply give up the fight to survive. Also, Lactobacillus Bulgaricus excretes natural antibiotics, which can have a broad spectrum of immune-boosting functions. Other helpful probiotic mechanisms include the blocking of pathogen adhesion sites within the mucous layer of the intestine. L Bulgaricus shows a proven ability to draw away toxins and defeat harmful bacteria.

Bifidobacterium Longum:
Bifidobacterium Longum is one of the most significant and important types of "good" bacteria which is found in abundance in the large intestine and vagina. The relationship between B. longum and human beings is mutually beneficial, because it maintains a normal digestive tract, inhibits the growth of harmful bacteria, and also boosts the immune system. Other benefits of B.longum include, "diarrhea prevention in antibiotic treated patients, cholesterol reduction, alleviation of lactose intolerance symptoms, immune stimulation, and cancer prevention. Supplements of Bifidobacterium longum, especially in combination with other beneficial organisms hold the best hope for preventing colon cancer and other types of digestive malignancies.