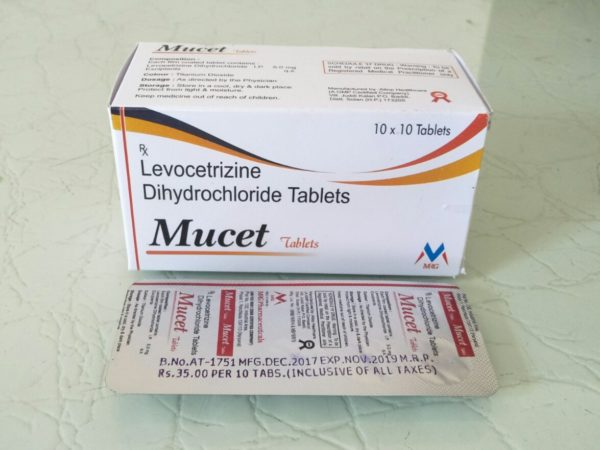 Be the first to review “MUCET” Cancel reply

Allergic Rhinitis: Levocitrizine is indicated for the relief of symptoms associated with allergic rhinitis (seasonal and perennial) in adults and children 6 years of age and older.

Chronic Idiopathic Urticaria: Levocitrizine is indicated for the treatment of the uncomplicated skin manifestations of chronic idiopathic urticaria in adults and children 6 years of age and older.

Distribution: Plasma protein binding about 92%. Vd is approximately 0.4 L/kg.
Metabolism: Metabolism is less than 14% and by aromatic oxidation, N- and Odealkylation, and taurine conjugation.
Elimination: The t ½ is about 8 to 9 h. Elimination is 85.4% and 12.9% via urine and feces, respectively. Excreted both by glomerular filtration and active tubular transport.

The active component of Levocetirizine dihydrochloride, is the R enantiomer of cetirizine hydrochloride, a racemic compound with antihistaminic properties. It is an orally active and selective H1-receptor antagonist. Histamines act on H1 receptors, causing the symptoms commonly seen in allergic reactions. Its inhibits these H1 receptors.

Like cetirizine, levocetirizine is to a high degree excreted unchanged: less than 14% of a given dose is converted into metabolites. There are several different metabolic pathways, including through the CYP1A2, 2C9, 2C19, 2D6, 2E1 and 3A4t pathways in the liver. A total of 13 different metabolites have been observed. In vitro studies have shown that levocetirizine does not affect the CYP isoenzymes of the liver, and the risk of interactions in connection with metabolism is considered to be very low.

There is a risk of interaction if the drug is used concurrently with alcohol or other CNS depressants.

The most commonly reported adverse effects are: