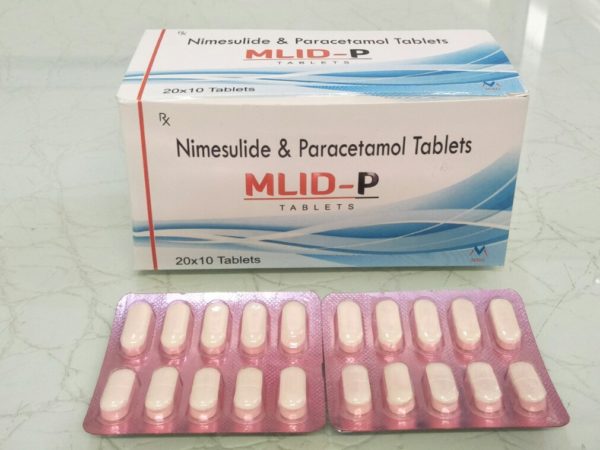 Be the first to review “MLID-P” Cancel reply

Nimesulide:
Nimesulide is a relatively COX-2 selective, non-steroidal anti-inflammatory drug (NSAID) with analgesic and antipyretic properties. Its approved indications are the treatment of acute pain, the symptomatic treatment of osteoarthritis and primary dysmenorrhoea in adolescents and adults above 12 years old.

Paracetamol :
Paracetamol is a widely used over-the-counter analgesic (pain reliever) and antipyretic (fever reducer). It is commonly used for the relief of fever, headaches, and other minor aches and pains, and is a major ingredient in numerous cold and flu remedies. In combination with non-steroidal anti-inflammatory drugs (NSAIDs) and opioid analgesics, paracetamol is used also in the management of more severe pain (such as postoperative pain).

Pharmacokinetics
Nimesulide is a nonsteroidal anti-inflammatory drug (NSAID) with anti-inflammatory, anti-pyretic, and analgesic properties. It inhibits prostaglandin synthetase/cyclooxygenase, which limits prostaglandin production. Its cyclooxygenase inhibiting potency is intermediate, but is relatively selective for the cyclo-oxygenase-2 (COX-2) thus the potential for gastric injury and intolerance is less. It is also a free radical scavenger, and helps protect against the tissue damage that occurs during inflammation.

Other Drug Interactions
Additive hepatotoxic effects with known hepatotoxins: anti-convulsants (e.g. valproic acid), anti-fungals (e.g. ketoconazole), anti-tuberculous drugs (e.g. isoniazid), tacrine, pemoline, amiodarone, methotrexate, methyldopa, amoxicillin/clavulanic acid. May decrease the oral bioavailability of furosemide and the natriuretic and diuretic response to furosemide. Increased risks of GI and hepatic adverse effects with other NSAIDs, including aspirin. May increase anti-coagulant effect of warfarin. Potentiates the action of phenytoin. May be displaced from binding sites with fenofibrate, salicylic acid, and tolbutamide. Interactions between NSAIDs and lithium, probenecid and ciclosporin, have been documented.