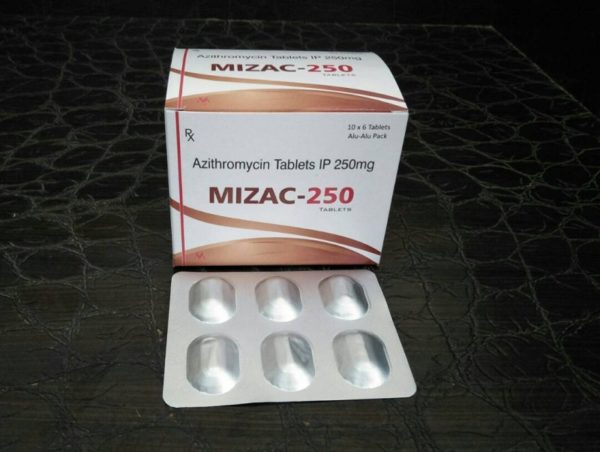 Be the first to review “MIZAC-250” Cancel reply

Azithromycin:
Azithromycin is macrolide antibiotic used to treat or prevent certain bacterial infections, most often those causing middle ear infections, strep throat, pneumonia, typhoid, bronchitis. Azithromycin Superior activity against gram ve,Gram-ve organism. It prevents bacteria from growing by interfering with their protein synthesis.
Mechanism
Azithromycin binds to the 50S subunit of the 70S bacterial ribosomes, and therefore inhibits RNA-dependent protein synthesis in bacterial cells.
Pharmacokinetics
Absorption: Following oral administration in humans, azithromycin is widely distributed throughout the body bioavailability is approximately 37%. The time taken to peak plasma levels is 2-3 hours.
Distribution: Pharmacokinetic studies in humans have shown markedly higher azithromycin levels in tissue than in plasma (up to 50 times the maximum observed concentration in plasma) indicating that the drug is heavily tissue bound. Concentrations in target tissues, such as lung, tonsil and prostate exceed the MIC90 for likely pathogens after a single dose.
Elimination: Plasma terminal elimination half-life closely reflects the tissue depletion half-life of 2 to 4 days. Approximately 12% of an intravenously administered dose is excreted in the urine over 3 days as the parent drug, the majority in the first 24 hours. Biliary excretion of azithromycin is a major route of elimination for unchanged drug following oral administration. Very high concentrations of unchanged drug have been found in human bile, together with 10 metabolites, formed by Nand O-demethylation, by hydroxylation of the desosamine and aglycone rings, and by cleavage of the cladinose conjugate. Comparison of HPLC and microbiological assays in tissues suggests that metabolites play no part in the microbiological activity of azithromycin.
Side Effects
Side effects of Azithromycin are most likely to be minor:
Abdominal pain
Rash
Headache
Contraindications
The use of azithromycin is contraindicated in patients with hypersensitivity to azithromycin, erythromycin, any macrolide or ketolide antibiotic.