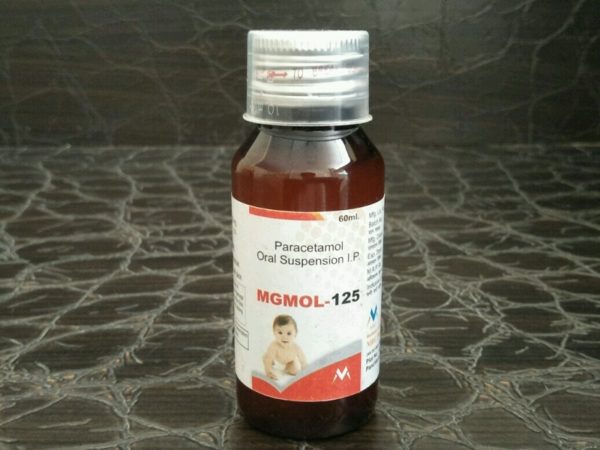 Be the first to review “MGMOL-125” Cancel reply

Mechanism of Action:
Paracetamol belongs to a class of drugs called analgesics and antipyretics. The exact mechanism of action of Paracetamol is not known. Paracetamol relieves pain by elevating the pain threshold, that is, by requiring a greater amount of pain to develop before a person feels it. It reduces fever through its action on the heat-regulating center of the brain.

Hepatic Impairment:
Paracetamol is considered to be a suitable analgesic option in most people with liver disease. There is no increased risk of hepatotoxicity when licensed doses are used.
However, in people with acute severe hepatitis, a 50% reduction in paracetamol clearance, resulting in a longer half-life, has been observed.
● In acute mild hepatitis, the normal licensed dose can be used.
● In moderate or severe acute hepatitis, if serum bilirubin is greater than 300 micromoles/L or prothrombin time is greater than 3 seconds, reduce to a maximum of 1 g twice or three times a day.
Liver Failure, Liver Problems, Overdose of the Drug Paracetamol, Habit of Drinking Too Much Alcohol.

Drug Interactions
Reduced absorption of cholestyramine within one hour of administration. Accelerated absorption with metoclopramide. Decreased effect with barbiturates, carbamazepine, hydantoins, rifampicin and sulfinpyrazone. Paracetamol may increase effect of warfarin.