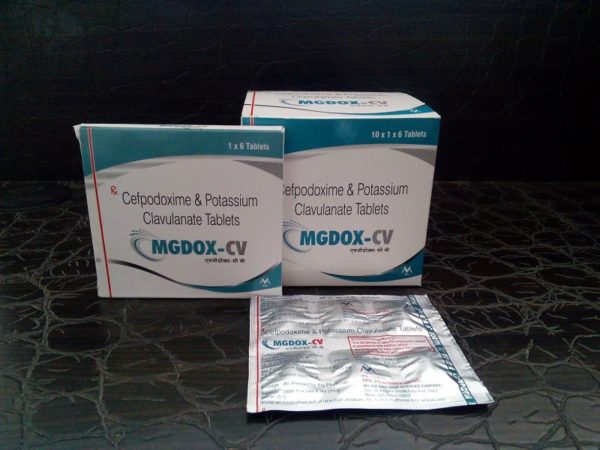 Be the first to review “MGDOX-CV” Cancel reply

Protein binding of cefpodoxime ranges from 22 to 33% in serum and from 21 to 29% in plasma. Half life of cefpodoxime is 2 hours. Concentrations of cefpodoxime in excess of minimum inhibitory levels (MIC) for common pathogens can be achieved in lung parenchyma, bronchial mucosa, pleural fluid, tonsils, intestinal fluid and prostrate tissue.

Potassium Clavulanate has been found to be approximately 25% bound to human serum. The metabolites are excreted through faeces, in the urine and through the lungs, with 20-60% of the dose being excreted in the form of parent drug.

Contraindication
It is contraindicated in patients with known allergy to penicillin, any other type of beta-lactam drug, cephalosporin class of antibiotic, beta-lactamase inhibitors or any other ingredients of this formulation.

Special Precaution
Pediatrics
Safety and efficacy of both the components  (cefpodoxime and potassium clavulanate) have been established in children age 3 months and older.

Clavulanate potassium: The reproductive and developmental toxicity studies on Clavulanic acid are available following oral administration; one generation in rat; teratogenic effect in rat; teratogenic effect in mouse and peri-and post natal development in the rat. However, no adequate and well-controlled studies with cefpodoxime and clavulanate potassium in pregnant women. Because animal reproductions are not always predictive of human response, It should be used during pregnancy only if clearly needed.