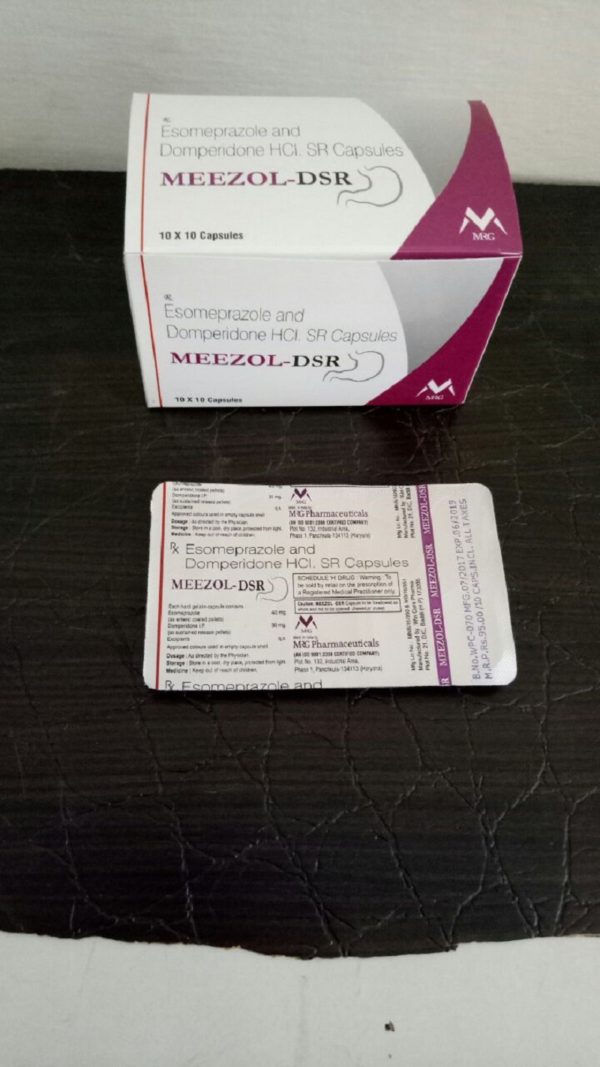 Be the first to review “MEEZOL-DSR” Cancel reply

Esmoprazole is a proton pump inhibitor administered orally as the magnesium salt in treatment of gastroesophageal reflux disease and in the treatment of duodenal ulcer associated with Helicobacter pylori infection.
Domperidone belongs to propulsives. It is used to treat ulcers and acid stomach.

Mechanism of Actions:
Domperidone is a peripheral dopamine D2-receptor antagonist, which regulates the motility of gastric and small intestinal smooth muscle. It increases the duration of antral and duodenal contractions and also LES resting pressure, thus stimulating gastric emptying and is also effective in relief of symptoms of reflux esophagitis. Antiemetic activity is due to the blockade of dopamine receptors in the chemoreceptor trigger zone. Esmoprazole inhibits the secretion of gastric acid by irreversibly blocking the enzyme system of H+/K+ ATPase of the gastric parietal cell. It is activated at an acidic pH to a sulphenamide derivative that binds irreversibly to H+/K+ ATPase, an enzyme system found at the secretory surface of parietal cells. It thereby inhibits the final transport of hydrogen ions (via exchange with K ions) into the gastric lumen.

Pharmacology:
Domperidone blocks the action of dopamine. It has strong affinities for the D2 and D3 dopamine receptors, which are found in the chemoreceptor trigger zone, located just outside the blood brain barrier, which, among others, regulates nausea and vomiting (area postrema on the floor of the fourth ventricle and rhomboid fossa). Esmoprazole is a Proton pump inhibitors which block acid at the final common pathway of secretion-that is, at the proton pump-regardless of the stimulus of acid secretion, and thereby offer by far the most potent suppression of gastric acid.

Pharmacokinetics:
Oral absorption is dependent on PH – best absorbed when acidity is present. Plasma half-life is only 1 hour, but it is tightly bound to its target enzymes. Hence, effects of the drug lasts for 24 hours. It is metabolized in liver and excreted in the urine.

Precautions:
Domperidone and Esmoprazole can cause a rise in serum prolactin level resulting in galactorrhoea in females and less frequently gynaecomastia in males. Hypertensive crisis may occur in patients with phaeochromocytoma. Renal impairment or those at risk of fluid retention. Hepatic impairment; elderly. Exclude the possibility of malignancy if gastric ulcer is suspected, before initiating treatment with esmoprazole, it may mask symptoms and delay diagnosis. Monitor patients on warfarin or phenytoin therapy, reduce dose if necessary.