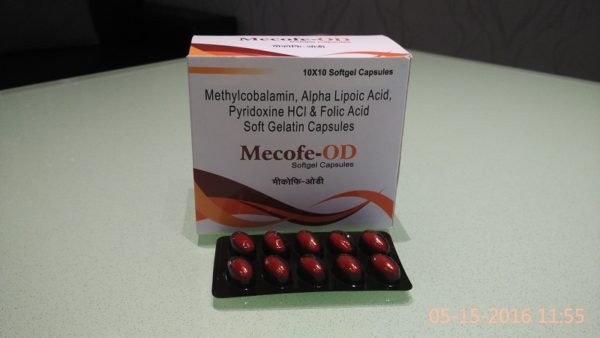 Be the first to review “MECOFE-OD” Cancel reply

Mecobalamin or methylcobalamin, one of several forms of vitamin B12. It is among the cobalamin family of compounds, and as the properly spelled name attests, it contains an attached methyl group. It is naturally produced by bacteria and is often present in the human body at low levels. It also has pharmaceutical applications in the treatment of a number of conditions, and is clinically relevant in the case of patients with Arakawa’s syndrome II, a metabolic disorder characterized by the inability to metabolizemecobalamin.
Vitamin B12 is an important vitamin for the human body. This water-soluble compound plays a role in neurological function, and is also involved in the process of producing blood.Mecobalamin can be used in the treatment of anemia when a patient has a B12 deficiency, and it is also employed in the care of patients with neurological disorders. Neuropathy, where the peripheral nervous system does not function normally and patients experience numbness, tingling, and other symptoms, can be treated with mecobalamin. The drug is also used in the early treatment of amyotrophic lateral sclerosis.
In patients with Arakawa’s syndrome II, mecobalamin in the body cannot be adequately processed. This leads to neurological deficiencies, as the nervous system and brain are not able to access the B12 they need. Patients can experience a variety of problems related to the nervous system, ranging from gastrointestinal distress related to poorly functioning nerves in the gut to learning disabilities associated with interruptions in brain function.
Methyl cobalamin is a cobalamin used in the treatment of peripheral neuropathy, diabetic neuropathy, and as a preliminary treatment for amyotrophic lateral sclerosis. It is a form of vitamin B12 and differs from cyanocobalamine in that the cyanide is replaced by a methyl group. Methylcobalamin is produced by some bacteria. It plays an important role in the environment. In the environment, it is responsible for the biomethylation of certain heavy metals. For example, the highly toxic methyl mercury is produced by the action of methylcobalamin.[4] In this role, methylcobalamin serves as a source “CH3 ”.

Folic acid (also known as folate (the form naturally occurring in the body), vitamin B9, vitamin Bc (or folacin), pteroyl-L-glutamic acid,pteroyl-L-glutamate, and pteroylmonoglutamic acid. are forms of the water-soluble vitamin B9. Folic acid is itself not biologically active, but its biological importance is due to tetrahydrofolate and other derivatives after its conversion to dihydrofolic acid in the liver. Vitamin B9 (folic acid and folate) is essential to numerous bodily functions. The human body needs folate to synthesize DNA, repair DNA, and methylate DNA as well as to act as a cofactor in certain biological reactions. It is especially important in aiding rapid cell division and growth, such as in infancy and pregnancy. Children and adults both require folic acid to produce healthy red blood cells and prevent anemia.

Vitamin B6, also called pyridoxine, is one of eight water-soluble B vitamins. Vitamin B6 (pyridoxine) serves as coenzyme and is involved in the metabolism of protein and carbohydrates, the production of insulin and red and white blood cells, and the synthesis of neurotransmitters, enzymes, and prostaglandins
Functions Pyridoxa hydrochloride the metabolically active form of vitamin B6, is involved in many aspects of macronutrient metabolism, neurotransmitter synthesis, histamine synthesis, hemoglobin synthesis and function and gene expression. Pyridoxal hydrochloride generally serves as a coenzyme for many reactions and can help facilitate decarboxylation, transamination, racemization, elimination, replacement and beta-group interconversion reactions.The liver is the site for vitamin B6 metabolism.