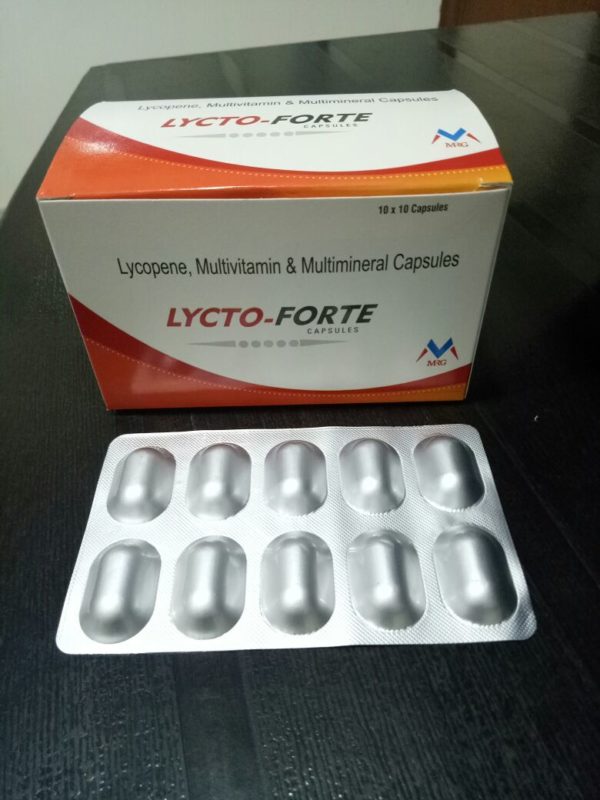 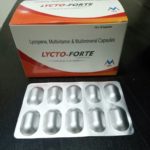 Be the first to review “LYCTO FORTE CAPSULES” Cancel reply

This Composition contains natural antioxidant extracts supplemented with essential vitamins and minerals. This combination is meant for the population who is conscious for their good health, particularly, their healthy and glowing skin. This combination constitutes those components which are blessed with great antioxidant activity and have powerful effects on the body. They are effective in maintaining the strength, thickness and fluidity of cell membranes. Cell membranes are the guardians of cells. They are responsible for screening what goes in and out of cells. They allow good nutrients in and remove cellular junk and prevent toxins from entering the cells. This combination is useful in skin inflammatory conditions including acne vulgaris; effective skin whitener, fat loss, collagen syntheses, anemia, maintenance of hair, skin and eyes, plays role in cognitive functions, brain function and heart disease.

Lycopene:
Lycopene (also known as psi-carotene), a carotenoid without provitamin-A activity, is present in many fruits and vegetables. It is a red, fat-soluble pigment found in certain plants and microorganisms, where it serves as an accessory light-gathering pigment and protects them from ultraviolet B radiation.

Niacinamide:
Nicotinamide, also known as niacinamide and nicotinic amide, is the amide of nicotinic acid (vitamin B3 / niacin). Nicotinamide is a water-soluble vitamin and is part of the vitamin B group. It occurs in trace amounts mainly in meat, fish, nuts, and mushrooms, as well as to a lesser extent in some vegetables. It is useful in skin inflammatory conditions including acne vulgaris; effective skin whitener.

Vitamin C:
Vitamin C (Ascorbic acid; Dehydroascorbic acid) is a water-soluble vitamin that is necessary for normal growth and development. It acts as cofactor in several collagen syntheses and also acts as antioxidant.

Vitamin B6:
Vitamin B6 is a water-soluble vitamin. The body cannot store them. Leftover amounts of the vitamin leave the body through the urine. That means we need a continuous supply of such vitamins in our diet. It might reduce cardiovascular diseases, also play role in cognitive functions, premenstrual symptoms, nausea and vomiting in pregnancy.

Mecobalamin:
Methylcobalamin (mecobalamin, MeCbl, or MeB12) is a cobalamin, a form of vitamin B. It differs from cyanocobalamin, in that the cyanide is replaced by a methyl group.
Methylcobalamin is the most potent form of Vitamin B12 found in nature which is useful in pernicious anemia (caused by deficiency of vitamin B12), also used in peripheral and diabetic neuropathy.

Ferrous Fumarate:
Ferrous fumarate is a type of iron. We normally get iron from the foods we eat. In our body, iron becomes a part of our hemoglobin and myoglobin. Hemoglobin carries oxygen through our blood to tissues and organs. Myoglobin helps our muscle cells store oxygen.

Selenium Dioxide:
Selenium is a mineral. Most of the Selenium in the body comes from the diet. The amount of selenium in food depends on where it is grown or raised. Crab, liver, fish, poultry, and wheat are generally good selenium sources. It acts as an antioxidant against free radicals that damage our DNA. It is often included with Vitamins C and E to help fight against heart disease and even aging. It has also been used to fight viral infections and may even slow the progression of AIDS/HIV. Selenium also contributes to good health by promoting normal liver function, increase male potency and also involved in the maintenance of hair, skin and eyes.

Mechanism of Action:
The mechanism of action may be associated with antioxidant activity (Antioxidants scavenge free radicals, otherwise known as reactive oxygen species (ROS), and prevent the damage they can cause) as well as decreased cell surface adhesion molecule expression and intima-media thickness.

Pharmacokinetics:
Catechins in green tea extract are absorbed and eliminated rapidly in humans with a half-life of 2-4 h. Peak plasma concentrations were achieved between 1 and 3 h after oral administration and reached total catechin concentrations in the sub- or low μM range. Tea polyphenols undergo considerable biotransformation, including methylation, glucuronidation, sulfation and ring-fission metabolism and excreted via urine.
Lycopene is much higher in processed tomato products due to its release from mechanical and thermal processing, as well as heat induced-trans to cis isomerization. Cis-lycopene is reported to be more bioavailable than trans-lycopene.
After ingestion, lycopene is incorporated into lipid micelles in the small intestine. These micelles are formed from dietary fats and bile acids, and help to solubilize the hydrophobic lycopene and allow it to permeate the intestinal mucosal cells by a passive transport mechanism. During metabolism, lycopene is incorporated into chylomicrons and released into the lymphatic system. In blood plasma, lycopene is eventually distributed into the very low and low density fractions. Lycopene is mainly distributed to fatty tissues and organs such as the adrenal glands, liver, prostate and testes. Rest of Lycopene is excreted via faeces and urine.

Drug Interactions:
Vitamin K present in green tea may affect the blood thinning effects of warfarin. Green tea consumption reduces the bioavailability of folic acid and may interfere with the absorption of iron. Lycopene interacts with some cancer chemotherapy agents, as well as with ciprofloxacin and olestra.

Precaution:
Consult your doctor:
● Before breast-feeding
● If any prevailing allergies