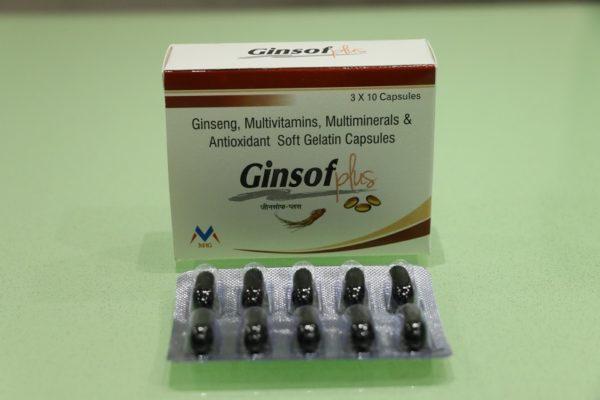 Be the first to review “GINSOF-PLUS” Cancel reply

This combination of Ginseng, multivitamins and mineral helps to rejuvenates and strengthens body organs. This health supplement helps in countering fatigue and keeps body fit and active all day long. Its benefits are very broad; it is effective in supporting the body during illness and protecting the organs from infection, and it is also an effective regulator of the nervous system. It promotes much improved concentration and deep, restorative sleep, as well as, fighting episodes of dementia. This product is also necessary to make certain neurotransmitters. These neurotransmitters are the signals that carry thoughts, feelings, and commands around our brains and throughout our nervous system. It also offers multiple benefits for aging skin, by improving skin's elasticity, dramatically enhance its barrier function, help erase discolorations, and revive skin's healthy tone and texture.

Ginseng:
Ginseng is believed to be the most traditional medicinal herb contains mainly, ginsenosides as active constituent. It has extensive pharmacological effects and specific mechanisms of action in Chinese herb medicine. Ginsenosides can inhibit ROS production, stimulate NO production, increase immune function, enhance central nervous system function, and prevent cardiovascular or other diseases. It is considered as the cream of the crop of medicinal plants when it comes to tackling fatigue. It is particularly recommended for those lacking in energy, as it is very strong and healthy stimulant. Ginseng is considered a panacea in that it treats a great number of problems and helps the body to combat many different diseases. Another notable (but not forgettable) benefit of Ginseng is its excellent capacity for balancing the nervous system, largely due to its abundance of group B vitamins. Because of this, Ginseng promotes much improved concentration and deep, restorative sleep, as well as, fighting episodes of dementia. It can be very useful for those suffering from emotional as well as physical hardships, and also for those who are trying to withdraw from drugs. Finally, it is an excellent plant for convalescents wishing to restore energy and vitality after illness or sporting injury.

Vitamin C:
Vitamin C is a water-soluble vitamin that is necessary for normal growth and development. It is best known as an antioxidant. Antioxidants help prevent excessive activity on the part of free radical molecules. Damage to the lens of the eye, damage to molecules circulating around in our bloodstream, and damage to genetic material (DNA) in our cells are all examples of damage that have been shown to be prevented under certain circumstances by vitamin C. It is required to produce collagen, a protein that plays a critical role in the structure of our bodies. Vitamin C is also necessary to make certain neurotransmitters. These neurotransmitters are the signals that carry thoughts, feelings, and commands around our brains and throughout our nervous system. In particular, we need vitamin C to produce serotonin, a hormone that plays a critical role in wide variety of body systems, including the nervous system, endocrine system, immune system, and digestive system. Many of our moods, daily bodily rhythms (including sleep-wake cycles), and experiences of stress and pain have serotonin included as a factor in their occurrence.

Niacinamide:
Niacinamide can be made from niacin in the body. Niacin is converted to niacinamide when it is taken in amounts greater than what is needed by the body. Niacin and niacinamide are easily dissolved in water and are well-absorbed when taken by mouth. Niacinamide is a potent cell-communicating ingredient that offers multiple benefits for aging skin. Assuming skin is being protected from sun exposure, it can improve skin's elasticity, dramatically enhance its barrier function, help erase discolorations, and revive skin's healthy tone and texture. It also has a growing reputation for being able to treat an uneven skin tone and to mitigate acne and the red marks it leaves behind (known as post-inflammatory hyperpigmentation). It is an excellent ingredient for those struggling with wrinkles and breakouts. Niacinamide is stable in the presence of heat and light.

Calcium D-Pantothenate:
Calcium D-pantothenate is a synthetic substance made from pantothenic acid. Vitamin B5 is one of the eight B vitamins and an essential nutrient our body uses to create energy and break down carbohydrates and fats. Our body requires vitamin B5 to carry out many nervous system functions. Doctors also prescribe Calcium D-pantothenate as a treatment for acne.

Vitamin B1:
Thiamine is an essential nutrient, and all the tissues of the body, including the brain, need thiamine to function properly. B1 is a key player in the production of energy from dietary carbohydrates and fats. It plays the most critical role of all, acting as the gate keeper between the less efficient step of early carbohydrate breakdown and the very energy-rich Krebs' cycle and electron transport chain. In addition to its role in energy production, Vitamin B1 plays a key role in the structure and integrity of the cells of the brain. If the deficiency is very advanced, or occurs at a critical period of brain development, the damage can be quite severe.

Vitamin B2:
Like all the B vitamins, Vitamin B2 plays a key role in energy production. Its role here is complicated—it is important both for the energy-producing electron transport chain and the metabolism of fat molecules into chemically useful energy. Additionally, Vitamin B2 plays a role in the chemistry of other nutrients involved in energy production, including folate and vitamin B6. It is one of many nutrients required to recycle glutathione, which is one of the most important antioxidants in the human body.

Vitamin B6:
Vitamin B6 is also called pyridoxine, is a water-soluble vitamin. It is involved at several steps in the metabolism of carbohydrates. In particular, the enzyme that pulls carbohydrates out of storage in the cell (in the form of a molecule called glycogen) requires vitamin B6 for its activity. It is one of several B vitamins required for proper production of messaging molecules in our nervous system and brain (called neurotransmitters). Three key neurotransmitters—namely GABA, dopamine, and serotonin—all require vitamin B6 for synthesis. It is involved in the process of making serotonin and norepinephrine, which are chemicals that transmit signals in the brain. It is also involved in the formation of myelin, a protein layer that forms around nerve cells, make antibodies that are needed to fight many diseases, make hemoglobin which carries oxygen in the red blood cells to the tissues. A vitamin B6 deficiency can cause a form of anemia. It also helps in breaking down proteins and keep blood sugar (glucose) in normal ranges.

Vitamin B12:
Vitamin B12 is a water-soluble vitamin. It plays several important roles in keeping our cardiovascular system on track. The first of these roles involves production of red blood cells. A second important role involves prevention of excessive homocysteine build-up. Vitamin B12 helps normalize levels of homocysteine in the blood by allowing conversion of homocysteine to methionine. It is also a necessary co-factor for the production of DNA, the genetic material that acts as the backbone of all life. This process requires folate and vitamin B6 as well. Some of the nervous system messengers (neurotransmitters) cannot be produced without the help of enzymes called methyltransferases, and these enzymes in turn cannot be produced without the availability of methyl groups. This area of methyl metabolism is another key way in which Vitamin B12 plays a major role in the health of our brain and nervous system. It is also important for maintaining proper supplies of succinyl-coA in the citric acid cycle; it is important for supporting all aerobic energy metabolism and supports bone health.

Folic Acid:
Folic acid is a type of B vitamin. It is the man-made (synthetic) form of folate that is found in supplements and added to fortified foods. It is water-soluble. That means your body does not store folic acid and you need a continuous supply of the vitamin in the foods you eat. Folate aids in the production of red blood cells, synthesis of DNA. It works with Vitamin B12 and vitamin C to help the body digest and utilize proteins.

Zinc:
Zinc is an important trace mineral that people need to stay healthy. Zinc is found in cells throughout the body. It is needed for the body's defensive (immune) system to properly work. It plays a role in cell division, cell growth, wound healing, and the breakdown of carbohydrates. It is also needed for the senses of smell and taste. During pregnancy, infancy, and childhood the body needs zinc to grow and develop properly.

Mechanism of Action:
Ginsenosides are amphiphilic in nature, and have the ability to intercalate into the plasma membrane. This leads to changes in membrane fluidity, and thus affects membrane function, eliciting a cellular response. Ginsenosides interact directly with specific membrane proteins. They are lipid-soluble signaling molecules, which can traverse the plasma membrane and initiate genomic effects.

Pharmacokinetics:
Absorption: The ginsenosides found in ginseng appear to be poorly absorbed. The bioavailability of Rb1 and Rg1 (ginsenosides) after oral administration is 0.71% and 3.29%, respectively. Compound K may be passively absorbed from the digestive tract. M4 was absorbed from the small intestine, was esterified with fatty acids, and then accumulated in tissues, including the lungs and liver. High elimination in the stomach, large intestine, and liver may contribute to the low bioavailability of these ginsenosides, but low membrane permeability is probably a greater limiting factor, especially as ginsenosides may be passively absorbed by simple diffusion or dependent on active transport.
Distribution: Once absorbed, the distribution of ginsenosides could be described by a two-compartment model. The ginsenoside Rg1 may have a plasma protein binding of 24% and tissue protein binding of 48% in the liver.
Metabolism: Intestinal metabolites of ginsenosides, are 20- O-(beta-D-glucopyranosyl)-20(S)-protopanaxadiol, known as compound K, and 20(S)-protopanaxatriol, known as M4.
Excretion: It appears that ginsenosides are excreted in the urine only in trace amounts.

Precautions:
Before taking this combination, tell your doctor or pharmacist, if:
● Known hypersensitivity
● During pregnancy and lactation
● Ginseng may lower blood sugar levels too much, especially in people with diabetes. If you have diabetes, monitor your blood sugar more carefully while using this product.
● Patients of high or low blood pressure, heart problems (e.g., abnormalheart rhythm, rheumatic heart disease), bleeding/clotting problems, a certain mental/mood disorder (schizophrenia), overactive immune system disorders (e.g. lupus, rheumatoid arthritis, multiple sclerosis), conditions that are affected by estrogen (e.g., endometriosis, uterine fibroids, cancer of the breast), should consult their doctor before taking this product.