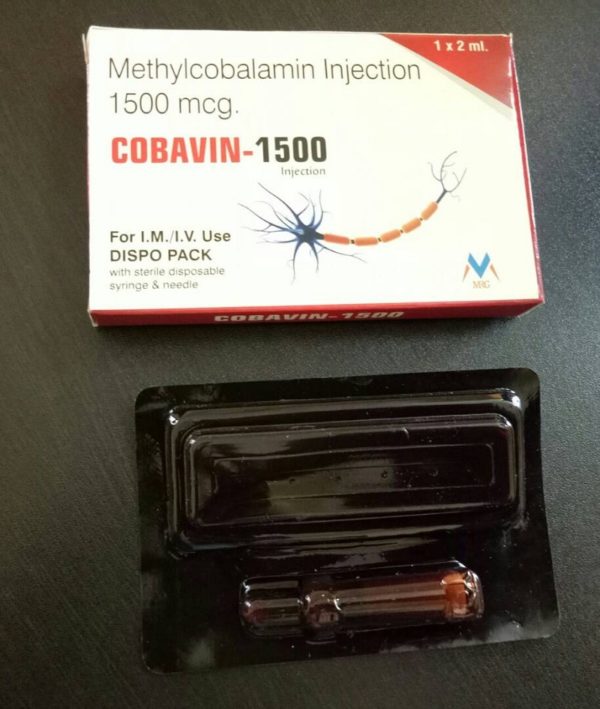 Be the first to review “COBAVIN-1500” Cancel reply

Methylcobalamin is one of the active metabolites of Vitamin B12 and has a critical role in the methylation process. It cannot be used as a singular source of vitamin B12, but must be combined with other forms of this vitamin as well.

Methylcobalamin is available in several forms, including topical solutions, oral preparations and injectable medications. Each of these forms is used for different purposes. Injections of methylcobalamin avoid the digestive tract and may be more rapidly available for the body to use.

According to the Natural Medicines Database, methylcobalamin, also known as Methyl B12, is considered likely safe when used appropriately. However, high doses of this vitamin may cause adverse effects. Below is some basic information specific to methylcobalamin injections, their side effects, possible drug interactions, appropriate dosages and contraindications.

Methylcobalamin injections are prepared to be delivered intravenously or intramuscularly. Injectable methylcobalamin doesn’t pass through the digestive system, which means that it is likely to have a quicker effect on the body compared to oral pills.

Some people also believe injections to be more effective than oral preparations. However, some studies have shown that the effectiveness of oral and injectable methylcobalamin is similar. Sublingual formulations are another option that avoids the digestive tract for people who do not like getting needles.

According to the Natural Medicines Database, research has shown that methylcobalamin injections are effective for several different purposes, including the treatment or prevention of vitamin B12 deficiency, pernicious anemia and Imerslund-Grasbeck disease.

Studies have shown that methylcobalamin injections may not be effective in the treatment of stroke or circadian rhythm sleep disorders. Likewise, current research indicates that injectable methylcobalamin has no significant effect on cognitive performance.