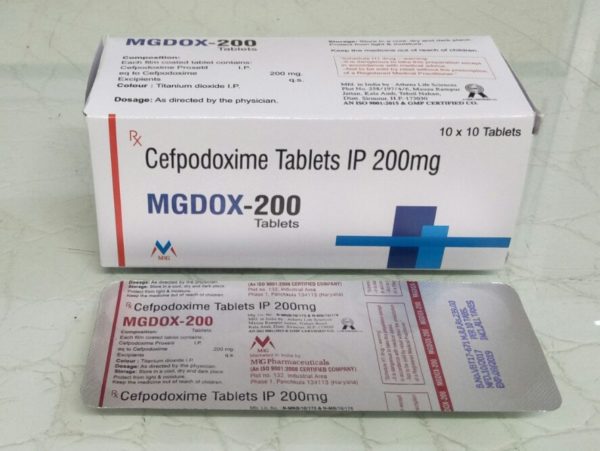 Be the first to review “MGDOX-200” Cancel reply

Cefpodoxime Proxetil
Is an orally administered, extended spectrum, semi-synthetic antibiotic of the cephalosporin class. It is given as a Cefpodoxime proxetil. Cefpodoxime proxetil is a prodrug which is absorbed and de-esterified by the intestinal mucosa to Cefpodoxime It is active against most Gram positive and Gram negative bacteria. It is commonly used to treat acute otitis media, pharyngitis, and sinusitis..

Mechanism of Action:
The bactericidal activity of cefpodoxime results from its inhibition of cell wall synthesis. The active metabolite of cefpodoxime binds preferentially to penicillin binding protein 3, which inhibits production of peptidoglycan, the primary constituent of bacterial cell walls. Cefpodoxime proxetil is a prodrug that is absorbed from the gastrointestinal tract and de- esterified to its active metabolite, cefpodoxime.

Pharmacokinetics:
Absorption: Following oral administration of 100 mg of cefpodoxime proxetil to fasting subjects, approximately 50% of the administered cefpodoxime dose was absorbed systemically.
Protein binding: 22 to 33% in serum and from 21 to 29% in plasma.
Elimination: Over the recommended dosing range (100 to 400 mg), approximately 29 to 33% of the administered cefpodoxime dose was excreted unchanged in the urine in 12 hours.
Half life: 2.09 to 2.84 hours.

Contraindications:
● Hypersensitivity reactions to cefpodoxime, other cephalosporins, penicillins, or other drugs.
● If cefpodoxime is to be administered to penicillin sensitive patients, caution should be exercised because cross hypersensitivity among beta-lactam antibiotics has been clearly documented and may occur in up to 10% of patients with a history of penicillin allergy.

Drug Interactions:
Antacids: Concomitant administration of high doses of antacids (sodium bicarbonate and aluminum hydroxide) or H2 blockers reduces peak plasma levels by 24% to 42% and the extent of absorption by 27% to 32%, respectively. The rate of absorption is not altered by these concomitant medications. Oral anti-cholinergics (e.g., propantheline) delay peak plasma levels (47% increase in Tmax), but do not affect the extent of absorption (AUC).
Probenecid: As with other beta-lactam antibiotics, renal excretion of cefpodoxime was inhibited by probenecid and resulted in an approximately 31% increase in AUC and 20% increase in peak cefpodoxime plasma levels.
Nephrotoxic drugs: Although nephrotoxicity has not been noted when cefpodoxime proxetil was given alone, close monitoring of renal function is advised when cefpodoxime proxetil is administered concomitantly with compounds of known nephrotoxic potential.
Drug/Laboratory Test Interactions: Cephalosporins, including cefpodoxime proxetil, are known to occasionally induce a positive direct Coombs’ test.
Take cefpodoxime tablets with food.