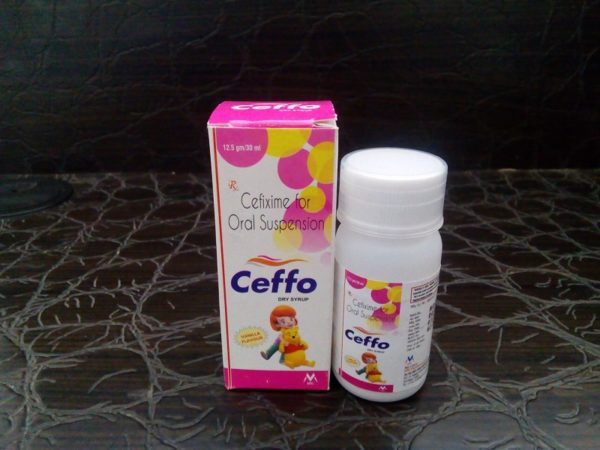 Be the first to review “CEFFO” Cancel reply

An antibiotic, is a third-generation cephalosporin like ceftriaxone and cefotaxime. Cefixime is highly stable in the presence of beta-lactamase enzymes. As a result, many organisms resistant to penicillins and some cephalosporins due to the presence of beta- lactamases, may be susceptible to cefixime. The antibacterial effect of cefixime results from inhibition of mucopeptide synthesis in the bacterial cell wall.

● Hypersensitivity to cephalosporins.
● Along with carbamazepine.
● Pseudo membranous colitis.

● Probenecid: Increases and prolongs the effect.
● Oral anticoagulants: Effects of anticoagulants potentiated.
● No clinically significant effect of food on the absorption of cefixime.

● Caution should be exercised in patients with history of diarrhea, stomach or bowel problems (eg, inflammation), bleeding or blood clotting problems, kidney or liver problems, poor nutrition, any allergy, who are taking other medications, children, during pregnancy and breast feeding.
● It may cause dizziness, do not drive a car or operate machinery while taking this medication.
● Avoid alcohol consumption.
● Avoid changing dose forms (eg, tablets, suspension) without your doctor’s advice.
● Take full course of treatment.

Other Precautions:
● It may reduce platelet counts, avoid injury or bruising.
● Avoid any vaccination during the treatment.