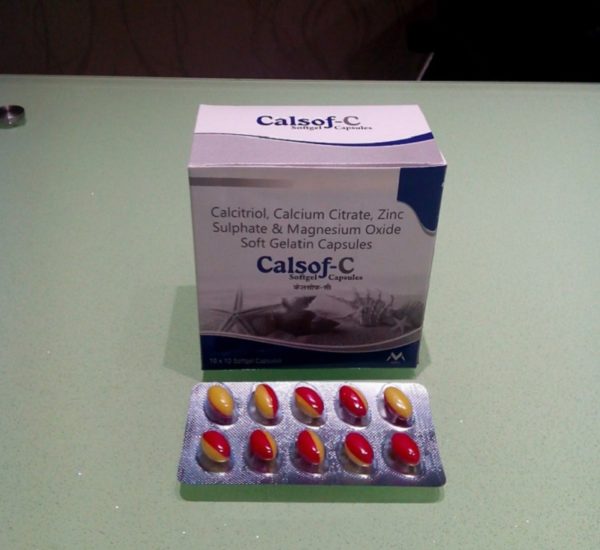 Be the first to review “CALSOF-C” Cancel reply

Calcium plays a vital role in the anatomy, physiology and biochemistry of organisms and of the cell, particularly in signal transduction pathways. The skeleton acts as a major mineral storage site for the element. Bone serves as an important storage point for calcium, as it contains 99% of the total body calcium. This combination is useful in people having low blood calcium levels; who do not get enough calcium from their diets. Calcium is the fifth most abundant element in the human body. It plays an important role in many physiological processes, including nerve and muscle functions. Not surprisingly, nutritional and metabolic deficiencies of calcium can have broad-ranging adverse effects. Since about 90% of the body's calcium is found in bone tissues, many of these adverse effects are manifested through deficiencies in the structure, function and integrity of the skeletal system. Thus this combination helps in maintance of calcium & healthy skeletal system.

Calcium Citrate:
Calcium citrate is calcium salt of citric acid. Calcium (Ca2 ) plays a pivotal role in the physiology and biochemistry of organisms and the cell. It plays an important role in signal transduction pathways, where it acts as a second messenger, in neurotransmitter release from neurons, contraction of all muscle cell types, and fertilization. Many enzymes require calcium ions as a cofactor, those of the blood-clotting cascade being notable examples. Extracellular calcium is also important for maintaining the potential difference across excitable cell membranes, as well as proper bone formation. It has been demonstrated that calcium from calcium citrate-malate (CCM), a mixture of calcium, citric acid and malic acid, is better-absorbed than calcium from calcium carbonate (CaCO3). Calcium is used to produce the minerals contained in bones, shells and teeth through a process called biomineralisation.