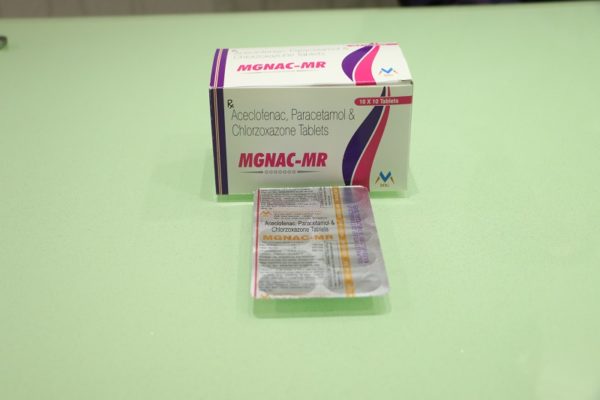 Be the first to review “MGNAC-MR” Cancel reply

Aceclofenac
is a non-steroidal anti-inflammatory drug (NSAID) analog of Diclofenac. It is used for the relief of pain and inflammation in rheumatoid arthritis, osteoarthritis and ankylosing spondylitis. The dose is 100 mg twice daily.
It should not be given to people with porphyria or breast-feeding mothers, and is not recommended for children.
Aceclofenac has higher anti-inflammatory action than conventional NSAIDs. It is a cytokine inhibitor. Aceclofenac works by blocking the action of a substance in the body called cyclo-oxygenase. Cyclo-oxygenase is involved in the production of prostaglandins(chemicals in the body) which cause pain, swelling and inflammation. Aceclofenac is the glycolic acid ester of diclofenac.

Chlorzoxazone
Is a centrally acting muscle relaxant used to treat muscle spasm and the resulting pain or discomfort. It acts on the spinal cord by depressing reflexes. It is sold as Muscol or Parafon Forte, a combination of chlorzoxazone and acetaminophen. Possible side effects include dizziness, lightheadedness, malaise, nausea, vomiting, and liver dysfunction. Used with acetaminophen it has added risk of hepatoxicity, which is why the combination is not recommended.

Pharmacokinetics
Aceclofenac is a phenylacetic acid derivative that inhibits synthesis of the inflammatory cytokines interleukin-1b and tumour necrosis factor, and inhibits prostaglandin E2 production. It increases glycosaminoglycans (GAG) synthesis, the principal macromolecule of the extracellular matrix, which aids in repair and regeneration of articular cartilage. Thus, aceclofenac has ve effects on cartilage anabolism combined with modulating effect of matrix catabolism. Paracetamol has analgesic and antipyretic action with weak anti-inflammatory activity. It produces analgesia by increasing pain threshold and antipyresis by acting on the hypothalamic heat-regulating centre.

Distribution
Aceclofenac: >99.7% bound to plasma proteins; distributes into synovial fluid. Paracetamol: Distributes throughout most fluids of the body.

Other Drug Interactions
Aceclofenac may increase the plasma concentrations of lithium & digoxin. Concomitant use of aceclofenac & diuretics may inhibit the activity of diuretics. The activity of anticoagulants may be enhanced when used concomitantly with aceclofenac. Additive CNS depression may occur when chlorzoxazone is administered concomitantly with other CNS depressants, including alcohol. Absorption of paracetamol may be reduced by pethidine & propantheline.